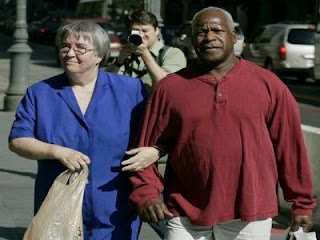 A Black Agenda Radio commentary by executive editor Glen Ford
Ralph Poynter, husband and comrade of people’s lawyer Lynne Stewart, is on vigil in Washington, DC, “appealing to the sense of humanity” of the powers-that-be. However, “it appears that Attorney General Eric Holder and President Obama, himself, are allowing Lynne Stewart’s days of life to drain away.”

Be Vigilant for Lynne Stewart – As She Was For All of Us
A Black Agenda Radio commentary by executive editor Glen Ford
“She is now at Stage Four, her condition deteriorating rapidly.”
There is a vigil underway in front of the White House, a life and death watch for a heroic people’s lawyer. Lynne Stewart dedicated her professional life to building whatever barricades of law she could to prevent the rulers from running roughshod over the people. Today, with Lynne’s life perilously in the balance, she requires the people’s due diligence in demanding that she be allowed compassionate release from prison.
Lynne Stewart should have never been there in the first place, a victim of the National Security State’s wars against humanity, both foreign and domestic. Stewart, one of the nation’s best and most dedicated guardians of human rights, was sentenced to 28 months in prison for zealously defending her client, the so-called “Blind Sheik” Omar Abdel-Rahman, accused in the 1993 bombing of the World Trade Center. Stewart helped her client write a press release, and wound up being convicted of obstruction of justice and giving material support to terrorists. That was in 2006.
Human rights organizations warned that the sentence would have “a chilling effect on human rights defenders who stand between government agencies and potential victims of abuses.” But Lynne Stewart was not chilled. She remained free on bail during her appeal. Stewart had already undergone treatment for breast cancer. Her appeal was denied and she began serving her 28-month sentence in November 2009. But the judge resented the fact that Stewart’s spirit had not been broken. She had seen so many clients caught in the jaws of the rich man’s criminal injustice machinery, and was prepared to serve her time if she were ensnared by the system, as well. But the judge resentenced Lynne to ten years in prison. She was 70 years old, and the breast cancer had returned.
“She requires the people’s due diligence.”
Stewart had been scheduled for cancer surgery the week she was sentenced, but was forced to wait another year and a half for treatment. By then, the cancer had metastasized. She is now at Stage Four, her condition deteriorating rapidly in a federal medical prison facility in Fort Worth, Texas.
Many thousands of petitioners – and many notables of the human rights community – appealed for Stewart’s release on compassionate grounds, so that she might get treatment at the best cancer hospital in New York, and spend what time she has left with her family and friends. The prison warden has signed for her release, as has the director of the Federal Bureau of Prisons. Her husband and fellow activist, Ralph Poynter, says Lynn’s post-prison housing has been approved by probation authorities. Yet, it appears that Attorney General Eric Holder and President Obama, himself, are allowing Lynne Stewart’s days of life to drain away.
Ralph Poynter has taken up the vigil in front of the White House, appealing to the sense of humanity of the man inside, and his Attorney General. They need to hear from you, too. Go to LynneStewart.org, sign the petition, make the calls, and if you can, join Ralph Poynter on his vigil in Washington, DC. That’s LynneStewart.org.