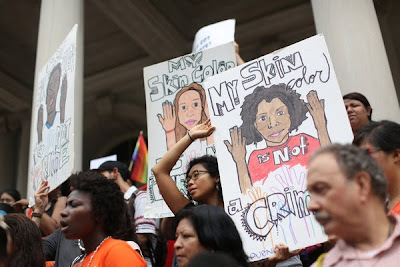 
Despite relentless threats, trolling and fear-mongering by Mayor Bloomberg and Ray Kelly - "Innocent people will be harmed," like they're not already? - New York's City Council voted to override Bloomberg's veto of two bills aimed at reforming the city's racist stop-and-frisk policy. The Community Safety Act bills call for an end to racial profiling, with a right to take legal action, and an independent inspector general to oversee the NYPD. Supporters and activists, who argued those opposing the bills did so from a vast divide that meant they'd never have to deal with the realities they represent, had worked with an array of local groups, including Communities United for Police Reform, the Center for Constitutional Rights and the New York Civil Liberties Union. Many applauded the vote as a vital first step toward ending racial profiling.

“I am voting to uphold these bills and override the mayor’s veto because he is out of touch with the realities in communities like my own...His children will never be stopped and frisked, or accused of ‘fitting a description.’" - Councilmember Ydanis Rodriguez.