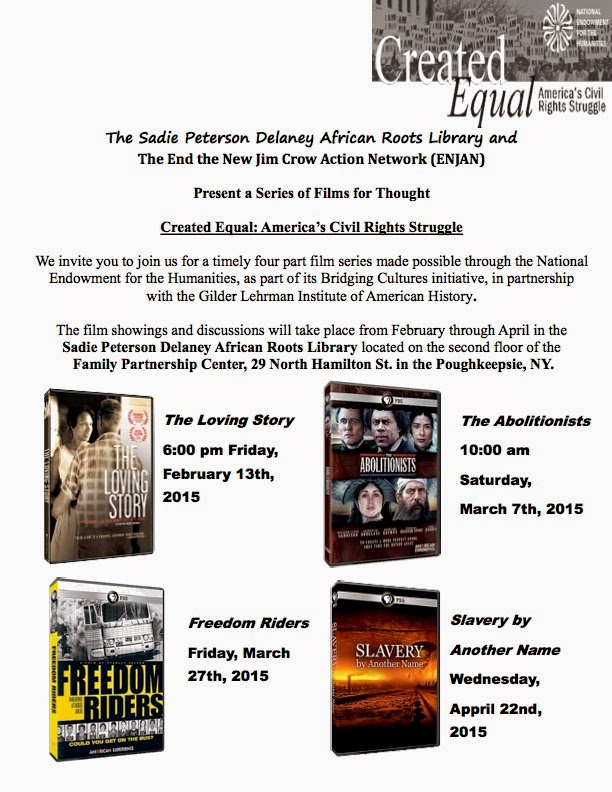 WHAT:  Opening of a Series of Films for Thought
Created Equal: America’s Civil Rights Struggle

We invite you to join us for a timely four part film series made possible through the National Endowment for the Humanities, as part of its Bridging Cultures initiative, in partnership with the Gilder Lehrman Institute of American History.
We will be viewing and discussing four films that cover the period of reconstruction through the Jim Crow years and into the civil rights movement. A local scholar with expertise on themes and happenings within each film will be leading interactive group discussions as we embark upon a journey to a better understanding of the struggles of race and social justice in America. A lot has been occurring in our country, especially recently, that echoes our past. What better time to reflect upon our history as we work for racial justice now and for the future.
The film showings and discussions will take place from February through April in the Sadie Peterson Delaney African Roots Library located on the second floor of the Family Partnership Center, 29 North Hamilton St. in the Poughkeepsie, NY.
The Loving Story (2011 – 77 Mins.)  6:00 PM Friday February 13th, 2015
This documentary brings to life the arrest and legal battle that followed the interracial marriage of Mildred and Richard Loving in Virginia in 1958. Scholar to be announced.
The Abolitionists (2013 – 180 Mins) 10 AM Saturday March 7th, 2015
This PBS mini series, shown in full (with a break for lunch) depicts the struggles of those who led the battle to end slavery. w/ A.J. Williams-Myers, SUNY New Paltz professor and author
Freedom Riders (2010 – 117 Mins.) 5:30 PM Friday March 27th, 2015
This film tells the terrifying and moving story of a time. when hundreds of white and black volunteers challenged the segregation laws of the Deep South to awaken the conscience of a complacent nation and risked being jailed, beaten, or killed. w/ Sally Bermanzohn retired Brookly College professor and author.
Slavery by Another Name (2012 – 90 Mins)  6:00 PM Wednesday April 22nd, 2015
From the Pulitzer-Prize-winning book by Douglas Blackmon, Slavery By Another Name tells the stories of men, charged with crimes like vagrancy, and often guilty of nothing, who were bought and sold, abused, and subject to sometimes deadly working conditions as unpaid convict labor. Scholar to be announced.

A Poughkeepsie Journal story today announced that the External Advisory Group of the Dutchess County Justice & Transition Center (jail) will hold a public meeting at the Bardavon on Thursday, January 29 at 6:00 PM. Quoting from the meeting announcement:

The agenda for the January 29th meeting will include updates and presentations on:
Members of the public are asked to submit questions prior to the meeting so they can be addressed during the meeting.  Those wishing to submit questions should email their inquiries to externaladvisorygroup@dutchessny.gov by Friday, January 23rd.  There will be an additional designated time allotted for the public to offer comments.  The public will be allowed to ask questions at the meeting, but those questions will be addressed after via email,  at future meetings of the External Advisory Group, and/or on the Dutchess County Justice & Transition Center project webpages.

KINGSTON: Two area clergy organizations will lead a “solidarity” march through Kingston at 4:00 pm, Saturday, January 17, 2015. The march is being staged to show solidarity with communities across the country, distressed by the recent refusal of grand juries in Ferguson, MO and New York City to indict police officers in the deaths of two black men.

The candlelight march is organized by the Ministers’ Alliance of Ulster County and the Kingston Council of Churches. It will begin at the Old Dutch Church, 272 Wall St., stop in front of the County Court House then proceed to the Midtown Neighborhood Center. Once inside, clergy representatives will address the marchers.

Rev. Dr. G. Modele Clarke, president of the Ministers’ Alliance of Ulster County, said the march is an important vehicle for public expression. He said it serves at least two major functions. First, it will give area residents an opportunity to publicly express their concerns about the increasing number of black men killed by police officers across the country, Clarke said.

“Secondly,” he said. “It allows Kingston to say, ‘We care!’ about the deaths of Michael Brown, Eric Garner and so many other black men, and to do so peacefully and publicly.”

Woodstock’s 25th Annual Birthday Tribute to
DR.  MARTIN LUTHER KING JR.
WHAT WOULD KING SAY?
Jose (Kiko) Garcia, Ernest Sayon, Nicholas Heyward Jr, Anthony Baez, Amadou Diallo, Patrick Dorismond, Ousmane Zongo, Timonth Stansbury Jr, Sean Bell, Ramarley Graham, Michael Brown, Eric Garner, Akai Gurley
Date: Sunday, January 18, 2015
Time: 2:00 pm
Place: Woodstock Justice Court, 76 Tinker Street
Featuring: Rev. G. Modele Clarke, New Progressive Baptist Church; Pam Africa, International Friends of Mumia Abu Jamal; Kortnee Simmons, Youth Activist, Kingston; Josh Otero, with Spoken Word Poets Poet Gold, Urban Lyrics from SUNY New Paltz and Hip Hop Performers; and Debra Burger, Freedom Songs
Sponsors: Martin Luther King Jr. Planning Committee, Haitian People's Support Project and Town of Woodstock
For Info: Call 845 679-7320
Free
The Struggle for Social Justice Continues
Through reflection, celebration, education and song let us remember the teachings of Martin Luther King, Jr.  “The whirlwinds of revolt will continue to shake the nation until the bright day of justice emerges.”(MLK, Jr.)
Across the country in communities of color, the role of the police has been not to protect and serve but to suppress and occupy.  Sparked by the almost daily police murders of young men of color and no indictments by the grand juries in the deaths of Michael Brown and Eric Garner, people have taken to the streets to say we need to change the system. “Change does not roll in on the wheels of inevitability, but comes through continuous struggle.” (MLK,Jr.)
Before his untimely assassination, King was perceived as a major threat when he linked the civil rights movement to the anti-war protests, to the struggle of workers to unionize, to the struggle of poor people.  A lasting message from Martin Luther King, Jr. is to include all who can be included in the struggle to transform America.
FEATURED PERFORMER – JOSH OTERO
Using Poetry and Hip Hop to Help Change Consciousness with friends including Poet Gold a published writer, spoken word performer, poet, artist, songwriter and community "activist." 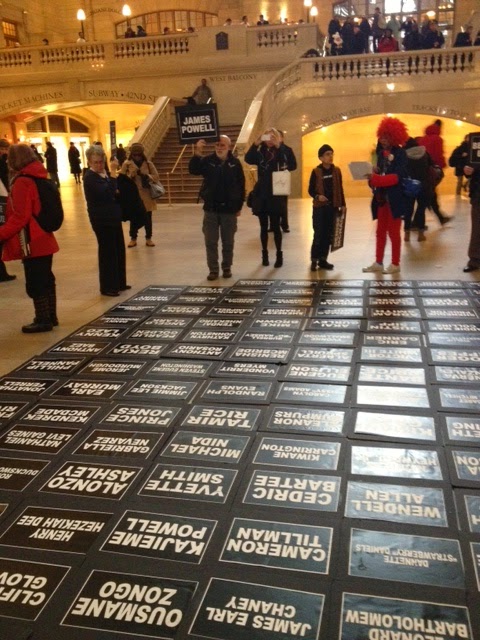