I would like to invite members of ENJAN to two events at Vassar this week with Professor Nicole Gonzalez Van Cleve.  Professor Van Cleve is author of Crook County: Racism and Injustice in America's Largest Criminal Court (Cook County, Illinois).  She did many hours of court observations in Chicago.  Considering ENJAN's court observation work, I believe members might find her lecture useful.  Her lecture is Thursday, November 30th at 5:30 p.m., in Sanders Classroom 212 Spitzer Auditorium.  I've attached the flyer.  All are welcome--no RSVP necessary.

Second, you are also invited to a workshop with Professor Van Cleve in a smaller setting to discuss court watching and other strategies for community members, professors, and students, and anyone else hoping to reform and bring about changes in the justice system. The workshop is Friday, December 1st, 12:30-2p, in the ​Dome Room (212) in the Old Observatory. If anyone is interested in attending this event (lunch is provided), please RSVP to Patricia Mathis (pamathis@vassar.edu). ,

If you have any questions, please feel free to contact me, Quincy Mills, Director of Africana Studies, Vassar College (qumills@vassar.edu) 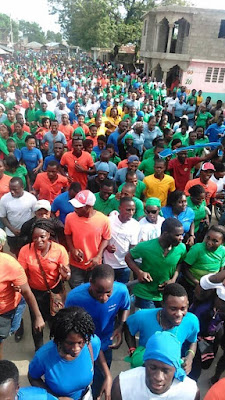 Activist Radio (5 - 6 pm) has the following guest on this Thursday:
GUEST: Leslie Mullin, social justice activist, member of the San Francisco-Bay Area based Haiti Action Committee and author of "How the U.S. Crippled Haiti’s Domestic Rice Industry," talks about the struggle against US imperialism in Central America and the implications of race and neoliberalism.
The interview can be heard this Thursday at 5 pm on 91.3 FM, or this Sunday at 5 pm from the Progressive Radio Network PRN.FM. You can also hear it streamed live from www.classwars.org. Each show is posted on the ClassWars website for the next ten weeks. Simply click on the date to listen.
Thanks,
Fred
Activist Radio
http://www.classwars.org

Racial Politics in the US

Activist Kamau Franklin on Why Black America Favors the Establishment

Daniel Falcone: What do you think are the reasons and the implications for the Democratic establishment to so readily count on African-American votes? And what are your thoughts on the hopes and prospects that black people can abandon this wing of the party, like take say, supporting a more progressive Sanders type message?

Kamau Franklin: There has been a marriage of convenience between the Democratic Party and the collective voting bloc of Black people that long ago gave up on anything substantive. The historical shift of black people from the Republican Party of Lincoln to the lukewarm embrace of the Kennedy Democrats was one-hundred years in the making.
Within the two parties, the amount of open hostility has determined which mainstream politic black people will engage in to find some expression of non-threatening acceptance. When Kennedy, Johnson and the elite black civil rights leaders [not MLK] began to strike bargains to open-up society, the tacit exchange was to bring black votes to the Democratic Party, where it’s now become the de-facto home for the vast majority of the participating black electorate.

Finally the black “liberal” leadership class of ministers, elected officials, pundits, public intellectuals, and moneyed black elites, who have the greatest interest in stability and the status quo, benefit the most from this arrangement with the Democratic Party. Most have no vision or interest in pushing a black agenda that does more than ask for acceptance or a lessoning of open racial hostility.

The two corporate parties won’t change and care for black majority interests. Black people have witnessed a black President having a limited ability to shape policy that advanced black majority interests replaced by someone openly hostile to those limited policy changes. This is an opening for black people to think about our relationship to America.