We're hiring for our next Campaigns

We're hiring for our next Campaigns Team Cohort building Black political power, and we're thinking you or someone you know might be the people to join us.

So many of our staff, myself included, were Color Of Change members like you before we joined the team. So, if working with a passionate Black-led team to make a real impact in the world is your dream--don't be shy, apply! The deadline is Sunday!

The Hidden Dimension of American Racism

Whitewashing and erasing of the national anthem movement 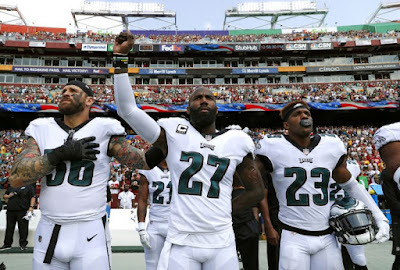 The whitewashing and erasing of the national anthem movement began in earnest this week. While we saw many players take emotional stands for racial justice, many teams, owners, and media outlets began to erase Colin Kaepernick and racial justice from this protest movement in favor of vague statements about “unity.”

From Roger Goodell’s weak rebuke of Trump’s comments, to owners Jerry Jones, Dan Snyder, and Shahid Khan using the protests as a photo-op, to Sports Illustrated erasing Kaepernick by leaving him off their athlete activism cover, to teams like the Denver Broncos, Green Bay Packers and New Orleans Saints being pressured into standing for the anthem, it’s clear that those in charge want to avoid the much-needed conversation regarding police brutality and racial justice.

With these efforts to erase the core message behind the anthem protests, and the ongoing blackballing of Kaepernick, it’s critical that we reaffirm what these protests are about and not let the league off the hook. They are about ending police brutality and racial justice. And the league has been given a concrete plan by their own players for how to engage and use their considerable resources to make a difference in the fight against police brutality and racial injustice. It’s time for the NFL to move past words and meaningless displays of “unity” and support the Support Players’ Platform for Racial Equality and Criminal Justice Reform.

Share the petition with friends and family to support the Players’ Platform for Racial Equality and Criminal Justice Reform.

Until justice is real,