JOIN US in speaking with County Executive Marc Molinaro about his $192M plan to invest in mass incarceration Jail Expansion Community Forum 6:30pm Tuesday, March 1 Beacon City Hall, 1 Municipal Plaza
Despite what County Executive Marc Molinaro may say, Beacon Prison Action recognizes the jail expansion as an unprecedented investment in the institutionally racist system of mass incarceration that would funnel our most underserved neighbors into jails and prisons instead of creating opportunities for positive life outcomes. Looming pressure from the state to bridge the gap between our high jail population and our lower jail capacity is an opportunity to invest in sensible programs to reduce the number of people in jail – such as bail reform, community mental health services and addiction treatment to name a few. We don't have a capacity problem, we have an incarceration problem!
Join us on Tuesday to hear what Molinaro says and share your questions! 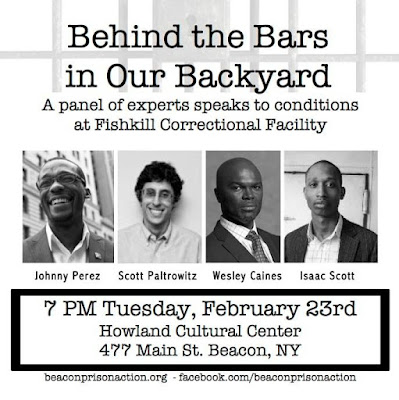 "Behind the Bars in our Backyard," will be held on Tuesday 2/23 at 7PM at the Howland Cultural Center in Beacon.

Hip-Hop is Bigger than the Occupation Film and Panel discussion - 2/11 - Rocky 200
ViCE Film is screening of Hip-Hop is Bigger than the Occupation with support from Students for Justice in Palestine (SJP) and Jewish Voice for Peace (JVP). Hip-Hop is Bigger than the Occupation follows a few US based Hip-Hop artists on a tour through historic Palestine where they meet with Palestinian Hip-Hop artists and discuss the solidarities between Black oppression and state violence in the United States, and human rights violations and violence towards Palestinians in historic Palestine. With that, Hip-Hop is highlighted as non-violent cultural resistance that takes place in both locations. The film will be followed up by a panel discussion on hip-hop as resistance from the US to Palestine. Panelists include M1 from dead prez, Professor David McDonald, NYU SJP President Taher Dahleh, Mazzi from S.O.U.L. Purpose, and a few others from Existence is Resistance.

Dabke Dance Workshop - 2/12 -UpC - 4pm
Dabke is a traditional Arab folk dance that’s been reclaimed by Palestinians as a form of cultural resistance to occupation and state violence. The workshop will be lead by members of the New York City Justice for Palestine, an organization which works continues to find creative approaches to discussing  this issue, one being Dabke Workshops. They will open the workshop with a short history of Dabke Dance, relate it to Hip-Hop Dance, and then teach attendees how to do Dabke.

Let’s Get Free: Hip-Hop as Resistance from the US to Palestine - 2/12 - Villard Room - 10pm
Hip-Hop 101, Students for Justice in Palestine, and Jewish Voice for Peace are excited to present New York City hip-hop artist M1 from dead prez to campus! M1 will be performing alongside Vassar artists Sean Blaise and SPOOK, as well as Mazzi and others who’ve traveled and performed across the US and Palestine. They’re here to show us how hip-hop can be used as a tool of resistance to occupation, colonization, and state violence.

2016 BLACK HISTORY EVENT
HEALING COMMUNITIES OF THE MID-HUDSON REGION
Presents
OUR JOURNEY OF FAITH
Helping Returning Citizens adjust to life after prison
on
Saturday FEBRUARY 13, 2016
ITWILLTAKETHEHANDSOFMANY
at
NEW PROGRESSIVE BAPTIST CHURCH
Rev. Dr. G Modele Clarke
8 HONE ST. KINGSTON NY
4PM TO 7PM
Healing Community of the Mid-Hudson Region Spokesperson: Casey O`Connell
Will explain the program and how it works
Mission Statement:
Healing Communities is a faith based organization dedicated to the goal of reducing recidivism. We enable faith based groups and community organizations to play a more active role in the lives of those affected by incarceration.
Entertainment by Terri Gittens