Getting Locked Out of the American Dream

Bill Moyers: Michelle Alexander on Getting Locked Out of the American Dream
After civil rights lawyer Michelle Alexander published her book The New Jim Crow in 2010 on our dehumanizing system of incarceration, she ignited a national conversation about justice in America and sparked a movement. In her book, Alexander explores how the war on drugs, “get-tough” sentencing policies and racism has created a caste system similar to that of our segregationist past.
Since then, Alexander has traveled the country to meet advocates and everyday Americans working to end mass incarceration in America — home to 25 percent of the world’s prisoners, despite representing only five percent of the world’s population.
She tells Bill that she has seen a grassroots movement brewing in communities across the country, “There are enormous victories that are being achieved precisely because the people whom we have written off and viewed as disposable are reclaiming their voice, standing up, speaking out, organizing even as they struggle to survive.”

"We saw in him what we seek in ourselves." Jacob Zuma 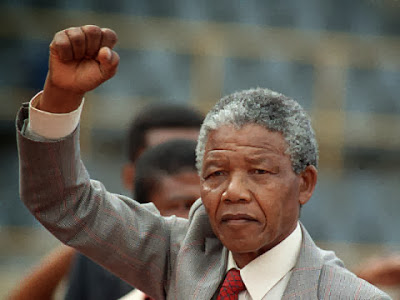 The death of Mandela will send South Africa deep into mourning and self-reflection 18 years after he led the country from racial apartheid to inclusive democracy.
But his passing will also be keenly felt by people around the world who revered Mandela as one of history's last great statesmen, and a moral paragon comparable with Mohandas Gandhi and Martin Luther King.

“No one is born hating another person because of the color of his skin, or his background, or his religion,” Mandela wrote in his memoir Long Walk to Freedom. “People must learn to hate, and if they can learn to hate, they can be taught to love, for love comes more naturally to the human heart than its opposite.”
- From the Guardian UK