Join TMI Project for the first ever intergenerational production of Black Stories Matter. The performance will feature radically candid true stories from local people of color about the experience of being black in America.

This is a special presentation during Black History Month In Kingston.

Angela Davis Speaks Out on BDS

It’s actually quite exciting to see the issue of Palestinian justice, justice for Palestine, emerge as a topic of popular discourse. We have attempted for so long to encourage a conversation like this. I don’t know whether I enjoy being at the center of the controversy; I think I’ve had my share of controversies in my life. But I’m happy to assist in the process of encouraging more discussion on racism, on anti-Semitism, on justice for Palestine. ... 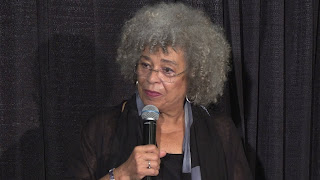 I have never concealed my support for the boycott, sanctions movement. As a matter of fact, when BDS was created, in 2005, I believe, as a response to efforts by Palestinian civil society to take measures that are in the spirit of the civil rights movement, as a matter of fact, it has been characterized as a nonviolent effort by Palestinian civil society to challenge the repression that is so pervasive in occupied Palestine. I have been a supporter of justice for Palestine almost as long as I can remember, at least since my years in college. More recently, I have been, perhaps, attempting to guarantee, along with many others, that the issue of justice for Palestine be placed on social justice agendas more broadly.

And it is, I think, the fact that those of us who have been doing this work over the last, I would say, seven or eight years, nine years, the last decade or so, have been relatively successful. There is support for justice for Palestine on college campuses across the country. Particularly black student formations have embraced this cause. We know that in 2014, when the Ferguson uprising took place, when the Ferguson protests erupted, it was Palestinian activists who were the first to express solidarity and, as such, helped to develop a global solidarity movement for Black Lives Matter.

So, I think that the characterization of the BDS as a way of acknowledging the South African—the boycott against South African apartheid, and using those strategies within the current situation, is absolutely accurate.

The Dutchess County Criminal Justice Council (CJC) will hold its bi-monthly meeting on Tuesday, January 15, at 8:00 AM in the Training Room at theDutchess County Stabilization Center, 230 North Road, Poughkeepsie.The CJC comprises all the major players in Dutchess County Government involved with criminal justice, including the district attorney, public defender, jail administrator, head of probation, head of parole, a few members of the D. C. Legislature, a few judges, a representative of the County Exec's office, the county's jail consultant, and various other hangers-on. There are generally about two dozen official attendees.

Movies That Matter Beacon will screen the docmentary film Survivors Guide To Prison on Saturday, Jan. 12 at 7:30 PM at the First Presbyterian Church, 50 Liberty Street, Beacon. This film is a chilling exposé of U.S. criminal justice, told through the eyes  of two innocent men who spent decades facing unimaginable brutality for murders they did not commit. Supported by gripping testimony from inmates, guards, staff, cops, analysts, lawyers and reformers, Survivors Guide advocates evolving beyond the failed “prison punishment model”  toward the dramatic moving programs proven to create public safety.  Guest Speaker is Jeffrey Deskovic, internationally recognized wrongful conviction expert and founder of The Jeffrey Deskovic  Foundation, which has freed 7 wrongfully convicted people. Admission is free.