White Privilege Forum Part One B – May 23rd at 6pmAt the New Progressive Baptist Church, 8 Hone Street, Kingston, NY
For info contact Odell Winfield at 914-388-3092
First Professor A.J. Williams-Myers will talk about the History of Racism then the Panelists Peter Heymann, Break Through Career and Life Coach, ENJAN member and Undoing Racism presenter, along with Tracy Givens-Hunter, former Southern Dutchess NAACP Criminal Justice Chair, Board Member ACLU of Lower Westchester, and Undoing Racism presenter, will lead an interactive discussion with the audience. Minister Rita Worthington of New Progressive Baptist Church, known to many as speaking out against the unequal treatment of black youth, will be the moderator.The intent of part One B of the forum is to continue to raise awareness of what white privilege and institutional racism are and show how they affect us all. Again please look at Chapter Six of Michelle Alexander’s pioneering bestseller, The New Jim Crow, Mass Incarceration in the Age of Colorblindness, will serve as a focal point of the discussion. “Perhaps the time has come to give up on racial bribes and begin an honest conversation about race in America. The topic of conversation should be how us can include all of us”, p. 257. 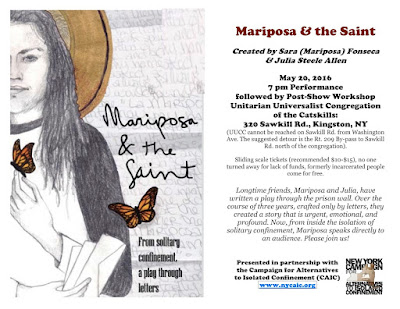 “Mariposa's story is one I now carry with me in a visceral and alive place. This is a must-see, and a must-share. And it will stir a must-respond from all who encounter it."
- Rev. Laura Markle Downton, Director of U.S. Prisons Policy & Program
National Religious Campaign Against Torture

Kingston, NY (Friday, May 20, 2016) – Julia Steele Allen, an award-winning playwright and activist, announced the play, Mariposa & the Saint, will come to Kingston, NY. Mariposa & the Saint: From Solitary Confinement, A Play Through Letters is based entirely on letters written between Sara (Mariposa) Fonseca and Allen while Mariposa was held in the Security Housing Unit (SHU) of a California women’s prison. The play is directed by Noelle Ghoussaini and performed by Julia Steele Allen and Ray Huth.

The event, hosted by the Unitarian Universalist Congregation of the Catskills, located at 320 Sawkill Road, Kingston, will consist of consciousness raising entertainment with the performance of the play Mariposa & the Saint followed by a workshop exposing the harms of solitary confinement in the United States.


KINGSTON, NY PERFORMANCE DATE:
Doors open 30 min. prior to each performance. Unless otherwise noted, tickets are $10-$15 sliding scale, no one turned away for lack of funds, formerly incarcerated come for free.

Friday, May 20, 2016- Kingston at 7PM: Unitarian Universalist Congregation of the Catskills, 320 Sawkill Road
(Please note, due to the Washington Ave. entrance to Sawkill Rd. being closed, please use Rt. 209 and the Sawkill Rd. exit and go south on Sawkill to 320 Sawkill Rd.)