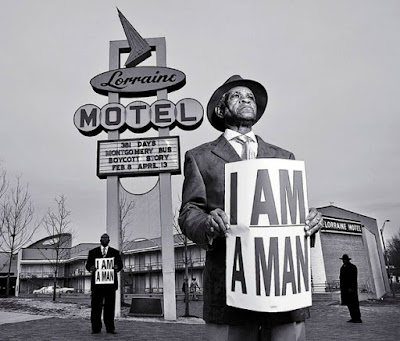 Following up on their move last year to reclaim for a new generation his revolutionary legacy from the revisionist white-washed narrative of him, Black Lives Matter activists and many others urge we mark this Martin Luther King Day by remembering the real, radical, complex and anti-war Dr. King that "we were never supposed to know, and certainly never revere" - the one who called out white supremacy, imperialism, police brutality and the link between racism and capitalism; who cited the hypocrisy of a national press that applauded his non-violence in the South but censured his criticism of the violence of the Vietnam War; who insisted that peace without justice is not peace and, like St. Augustine, that "an unjust law is no law at all"; who blasted those who criticized Birmingham's "riots" without acknowledging the conditions and righteous rage that gave rise to them; who initially titled his renowned "I Have A Dream" speech,  "Normalcy, Never Again"; who said the problems of racial and economic inequality could only be solved with the "radical redistribution of political and economic power"; who was "tired of singing." The myth-busting, and the vital work, go on.