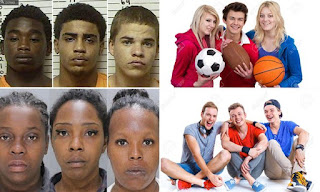 A simple Google image search highlighted on Twitter has been said to highlight the pervasiveness of racial bias and media profiling.

Kabir Alli of Virginia posted a clip to Twitter of himself carrying out a straightforward search of “three black teenagers”, which overwhelmingly turns up prisoners’ mugshots.


He and others erupt in laughter when the result for “three white teenagers” show stock photos of smiling, wholesome-looking young people.