March and film: Alliance for Families March of Justice 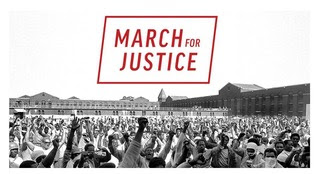 Here is the address we will meet and leave from on Sunday, 9/3 to march to Poughkeepsie. Please arrive by 9:00 am so you can register or so you can check in if you are already registered.


The March for Justice is an undertaking by the Alliance of Families for Justice–NY (AFJ-NY) to bring attention to human rights abuses in New York State prisons and jails. The March started in New York City on August 26, 2017, is coming through the Mid-Hudson Valley, and will culminate in a press conference and rally in Albany on Sept. 13, 2017, the anniversary of the 1971 Attica uprising and massacre.

Sun, 9/3, 6:00: Strength of a Woman: Film and Discussion about justice for victims of domestic violence who are charged for fighting back. Potluck Community Meal at 4:30, UU Fellowship, 67 S. Randolph Ave, Poughkeepsie